Two years ago, Taryn Kay was appointed superintendent of the Grand County School District, which meant she took charge in the midst of a worldwide pandemic.

Her first year as superintendent was spent navigating mask requirements and leading efforts to help students who had experienced learning loss get back on track after attending school online for the last few months of 2020.

Each day brought new challenges but Kay leaned on her nearly 30 years of experience as a classroom teacher, special education director and principal in the Grand County schools to guide her in the superintendency.

She clearly wanted the job, having applied for the superintendent’s position on two previous occasions.

“They hired men in both instances, both not from Moab. When I became superintendent, I actually got appointed,” she said.

In Utah, 14% of the state’s 41 public school districts are led by women. Kay is one of six of those superintendents, now starting her third year on the job. 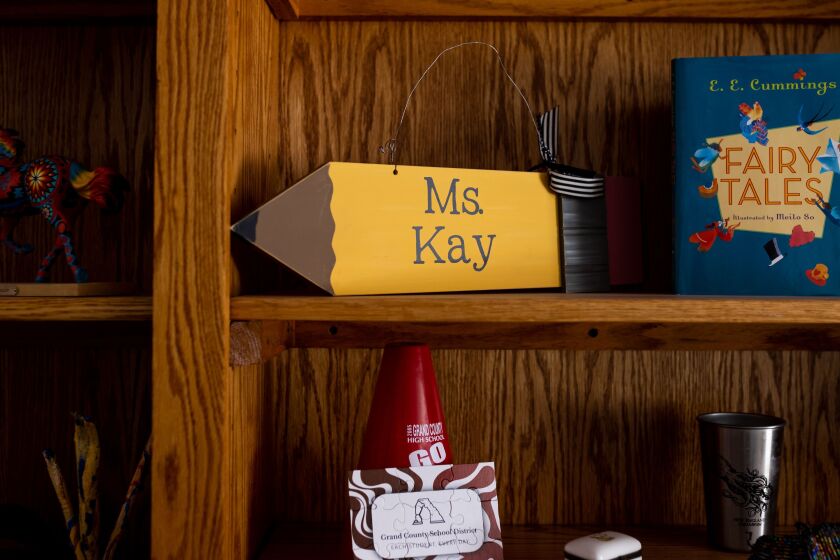 Utah’s State Superintendent of Public Instruction Sydnee Dickson was appointed by the state school board in 2016 and is just the second woman to hold the top post in 55 years.

Numbers of women principals have increased in recent years but Utah lags behind national rates there, too. There is a much higher percentage of female principals in elementary schools than in middle and high schools.

Some of the highest percentages of women leaders in K-12 education in Utah are found in charter schools, in which just over 60% have female principals, and among Utah elementary school assistant superintendents, of which 71.4% are women, according to the report.

Susan Madsen, founding director of the leadership project and one of the study’s authors, said she hopes more women will fill leadership roles in K-12 education in the future.

“Having equal representation of men and women leaders in our schools is critical since both have diverse experience and skills that can complement each other,” Madsen said in a statement.

The report’s other authors, Hannah Payne and Kim Buesser, who are research associates for the Utah Women & Leadership Project, note that “Women in leadership offer more diverse pathways to better decision-making, and women in general are more committed to inclusiveness and cooperation in the workplace.”

Kay said at different times in her career she was encouraged to seek leadership opportunities, which is something she urges women educators to do as well.

“I just let people know that they can do it and to not get discouraged if they don’t get something on the first go-round,” she said. Kay said it was her experience that interview committees tended to be more amenable to male candidates, which is also interesting considering elected local school board members in Utah are nearly evenly divided between men to women.