But after weathering a global pandemic — and then airport delays and a train strike — to embark on the History Department’s first-ever study abroad course, they weren’t about to turn back.

“It was tiring to get to the top, but now I can say I walked up an extinct volcano,” rising senior Sarah Lindtveit says of the 20-minute hike.

“That was the biggest highlight of the trip for me,” adds rising senior Matthew Downey. “The view of the city was amazing.”

Lindtveit and Downey were among 16 students who traveled to England and Scotland this summer for Fogle’s two-week, three-credit study abroad course, “Topics in History.”

An expert in medieval European history who has taught at UML since 2009, Fogle says that students would often half-kiddingly ask when she was going to lead a study abroad trip — usually after seeing photos of her travels while in graduate school (she earned a master’s and Ph.D. from Royal Holloway, University of London).

“And then during the COVID year when we were all on Zoom, it wasn’t a joke,” she says. “The questions became more pointed, like, ‘No, really, when are we going?’ And so I said to myself, ‘OK, let’s do it.’” 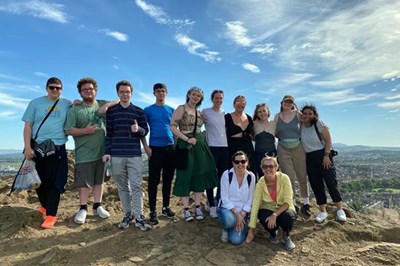 
The study abroad group poses for a photo after conquering the 824-foot “Arthur’s Seat” in Edinburgh, Scotland.
Although created for history students, the course was open to any major. Students were required to write a research proposal before the trip, keep a journal while traveling, write a research paper and give a presentation via Zoom about their experience once back home.

“Seeing how fresh this history still is within the minds of Europeans was a big shocker for me,” says Downey, who had traveled internationally once before. “This experience definitely made me more aware of the world around me.”

It was the first time abroad for Lindtveit, an elementary education major from Methuen, Massachusetts. She took “Women in the Middle Ages” with Fogle last spring and knew “from the very first day” of class that she had to join her study abroad course.

“I’ve always wanted to study abroad, and I thought going to Scotland and England would be great first steps,” says Lindtveit, who took a day trip with classmates to Paris by Eurostar train on her free day. “This was an adventure for me, and it allowed me to see that international travel is not as terrifying as I thought.”

An avid reader, Lindtveit’s research topic for the course was the original manuscript of Sir Gawain and the Green Knight, a 14th-century masterpiece of Middle English literature — which she saw on a visit to The British Library.

Azent Overseas Education can make your journey easier as competition to study in UK, Australia Intensifies