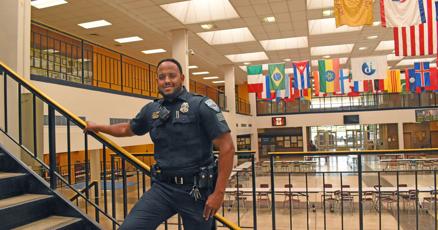 Metal detectors have been installed. Windows have been tinted to make it harder for someone to peer inside a school. Security cameras have been added.

These are a few of the safety measures the three public school systems in Catawba County embraced in the past year.

The shooting at Robb Elementary School in Uvalde, Texas, in May, which killed 21 people, heightened questions about safety and security in schools across the country. According to data gathered by nonprofit newspaper Education Week, there have been 27 school shootings with injuries or deaths since the beginning of 2022.

A significant improvement that Catawba County Schools is planning is the addition of security vestibules at Maiden Elementary, Maiden Middle and Maiden High schools. These are the only three schools in the district without security vestibules, Assistant Superintendent of Operations Daniel Moore said via email.

“A security vestibule is a foyer that allows parents or visitors to enter the building — after showing their ID and stating their purpose,” Moore said. “And allows for interaction with Catawba County Schools employees while restricting access to the entire building, students, faculty and staff. Security vestibules vary in size due to the age and composition of each building.”

Moore said district schools have added tint to various parts of the buildings, such as windows to cafeterias, lobbies or other high-visibility areas. Other improvements include landscaping to improve the line of sight around school campuses. He said upkeep of campus landscapes is an important part of overall campus safety.

Hickory Public Schools is currently working on a project to purchase and install additional cameras to buildings in the district and to replace school bus camera systems, Superintendent Bryan Taylor said via email. He said the district conducted a safety assessment for every district building to see where improvements were needed.

“(Hickory Public Schools) added 19 cameras in the district with a focus on middle and high schools,” Hickory Public Schools Director of Student Services Angela Simmons said via email. “The grant for this school year is projected to add approximately 45 cameras, including some upgrades to the recording and viewing systems.”

“The safety assessment also showed areas where additional training is needed for school staff and for district staff,” Simmons said. “We are working closely with the Hickory Police Department, Center for Safer Schools and Vector Solutions for the additional training. With having several new principals, we will be conducting training for them on the School Risk Management Plan online safety plan, as well as updating our annual safety plans.”

Hickory Public Schools also purchased additional walk-through metal detectors, two-way radios and established a partnership with juvenile court counselors, who will have office space at each of the middle and high schools, Taylor said.

Newton-Conover City Schools is adding a new buzzer system. Director of Facilities and Safety Robin Rudisill said the system is a security intercom system that provides voice and video communication. A buzzer system will be located at the main entrance of each school.

Keeping Tabs on the Education World