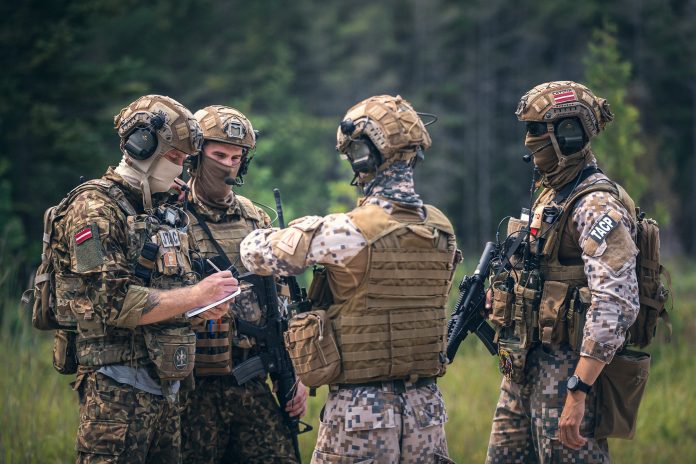 Citizens living abroad will be drafted into the State Defence Service (VAD) as well, and with appropriate funding military service may become mandatory for women as well, said spokesperson for Latvia’s Ministry of Defence Kaspars Galkins.

Galkins explained the ministry’s proposed service is a new social agreement between the state and society, which means every citizen must become involved in defence of the state. This involvement is one of the important guarantees for Latvia to not experience Russia’s military aggression. This is why service in VAD will apply to Latvian citizens living abroad and who are of appropriate age.

«This is critically important to prevent the conditional segregation that was in the mandatory draft in the Soviet Union and the 90s, when people who didn’t know how to avoid it were drafted. Latvian society should change their mindset and accept that service in the army is matter of honour and a duty for all, like it is in Finland, for example, and not a punishment,» explained Galkins.

Previous experience shows that citizens who live abroad and who have joined the National Guard return to Latvia and participate in drills on a regular basis.

Although the Ministry of Defence has proposed to adopt VAD for men only for now and that women will be able to enlist voluntarily, the ministry categorically opposes making this service mandatory for young women.

Looking at other countries’ experience, Latvia’s Ministry of Defence based its judgement on the fact that men would make up the bulk of draftees.

The Ministry of Defence also stands for gender equality. If the government and the Saeima agree to provide additional financing for the project needed to draft and train twice as many citizens at once, it will be possible include more women into the service.

Galkins also said that before submitting the suggestion for VAD, the ministry performed an in-depth evaluation, which included interviews of youngsters and women.

The study concluded that the absolute majority of women were negative about enlisting with VAD.

The ministry did not, however, list the methods as to how state defenders will be selected. Currently the ministry relies on principle of volunteer service, hoping youngsters will enlist on their own. At the same time, the ministry does plan to use modern solutions and databases available in the country. Some candidates will be approached and interviewed individually.

Currently it is unknown what sanctions Ministry of Defence intends to use for intentional avoidance of military service.

«We will continue studying Finland’s experience when it comes to punishment for military service avoidance. However, as previously mentioned, the ministry invites a change of attitude towards military service. VAD is in every Latvian resident’s interest,» stressed Galkins.

He also reminded that existing personnel and infrastructure resources of Latvia’s National Armed Forces will be enough for the training of the first conscripts.

Finland’s experience shows that additional instructors will be trained during military service.

As previously reported, Latvia’s Ministry of Defence has suggested gradual adoption of VAD in the country. The plan includes for the creation of a system in the next five years under which all male Latvian citizens aged 18 to 27 years will be able to volunteer for one of four types of service: State Defence Service, National Guard, commander course or alternative service – at Ministry of the Interior, Ministry of Health and Ministry of Welfare.