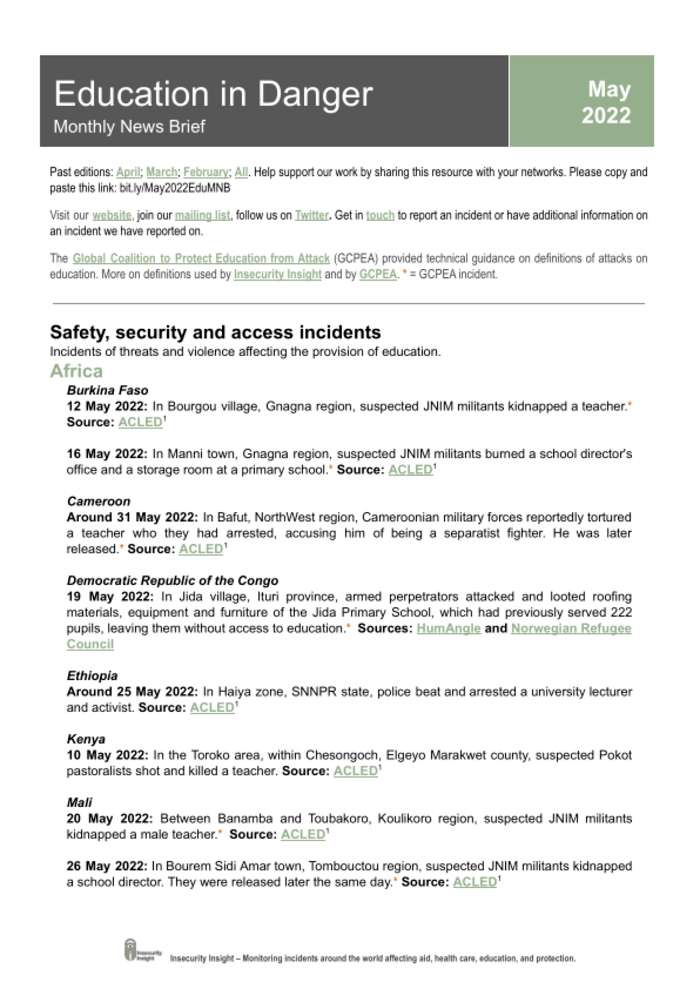 Incidents of threats and violence affecting the provision of education.

Around 31 May 2022: In Bafut, NorthWest region, Cameroonian military forces reportedly tortured a teacher who they had arrested, accusing him of being a separatist fighter. He was later released. Source: ACLED

Democratic Republic of the Congo

19 May 2022: In Jida village, Ituri province, armed perpetrators attacked and looted roofing materials, equipment and furniture of the Jida Primary School, which had previously served 222 pupils, leaving them without access to education. Sources: HumAngle and Norwegian Refugee Council

Around 25 May 2022: In Haiya zone, SNNPR state, police beat and arrested a university lecturer and activist. Source: ACLED

10 May 2022: In the Toroko area, within Chesongoch, Elgeyo Marakwet county, suspected Pokot pastoralists shot and killed a teacher. Source: ACLED

18 May 2022: In Andarab district, Baghlan province, a teacher was arrested and tortured by the Taliban forces in accusation of having ties with National Resistance Front (NRF). Source: ACLED

As reported on 06 May 2022: Of all girls in Afghanistan, nearly 80 percent remain unable to access education. The Taliban had planned to allow girls to attend classes in secondary schools on the 23 March but reversed their policy on the day of its instigation, thereby preventing millions of girls from attending school. Sources: The New Arab I and The New Arab II

As reported on 04 May 2022: Update: In Yining city, Ili autonomous prefecture, Xinjiang autonomous region, at least seven ethnic Uyghur educators of the Nr. 8 High School have been confirmed to be imprisoned by Chinese authorities. Source: Radio Free Asia

12-17 May 2022: In Porgera town, Lagaip-Porgera district, Enga province, a private school was burned down amid an outbreak of widespread communal violence involving unspecified actors. Source: OCHA

27 May 2022: In Falam township, Chin state, according to the military council, an unidentified armed group kidnapped a high school principal of Htot Lai Basic Education High School accusing him of being a military informant. Source: ACLED

28 May 2022: In Myanaung township, Ayeyarwady region, police forces assaulted and arrested a female teacher who participated in the Civil Disobedience Movement. Source: ACLED