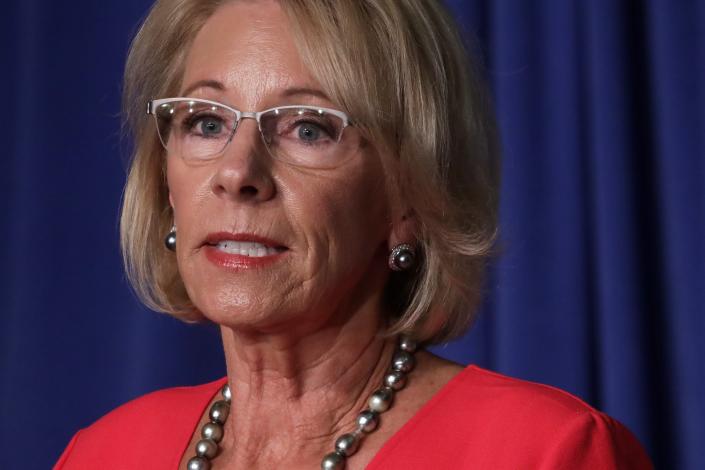 DeVos has been outspoken against the federal government holding authority over public schools across the US.Alex Wong/Getty Images

Betsy DeVos said the Department of Education, which she used to run, shouldn’t exist.

She served as Secretary of Education under Trump, and supported reducing the department’s authority.

DeVos previously said that career staff in the department pushed back on many of her efforts.

Former Secretary of Education Betsy DeVos said Friday that the department she once steered should be abolished in favor of giving more authority to state and local education boards.

“I personally think the Department of Education should not exist,” said DeVos, nonprofit news site Florida Phoenix first reported. DeVos’ comment was received with cheers and applause as she spoke at the first national Moms for Liberty summit over the weekend.

Moms for Liberty is a conservative nonprofit founded in Florida that advocates for parents to have more influence over public school decisions. The organization first received national attention when it fought against mask mandates in schools, and later when it opposed curriculum related to LGBTQ rights, race, and discrimination.

This isn’t the first time DeVos, who served as education secretary under former President Donald Trump, has spoken against the Department of Education.

“I’ve said often, I frankly don’t think the Department of Education should exist,” she said at a June 15 fireside chat organized by American Enterprise Institute, a think tank.

“Did that play well?” asked political scientist Frederick Hess, who moderated the talk.

“Not necessarily with the staff there, but with a lot of folks outside Washington it does,” she said.